Finally, Some Crabs in the Trap

Ginny and I have been happily married for 50 years , have 2 sons and 6 grandchildren. We have been avid boaters since the mid 1970's. We have sailed in various parts of the world making 'bareboat' charter trips in the Washington and Canadian San Juans and Gulf Islands, Maine,the British Virgins, South Pacific's Moorea and Tuamoto's and New Zealand. We owned and raced a J-24, Laser, and cruised a Newport 30 before buying a long range trawler in 2003 and cruising the waters of the Pacific Northwest and the 'Inside Passage' of British Columbia to SE Alaska for the last 10 years. After first owning a 2000 Selene 47, and 2002 Selene 50 (both named 'Ina Marie', we now, in the 'bell lap' of our boating days, own, operate and thoroughly enjoy 'Ginny C' , our 2007 Selene 42. 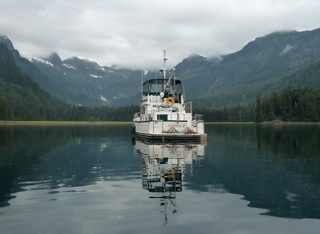 I awake at 6 am and it is clear.  Ginny and I get up at 7 and we are fogged in.  We can see the crab trap floats but not much further.  The trap yields 4 barely large enough ‘keepers’ so we will feast on crab again when we  reach Takatz Bay, our destination about 35nm away in Chatham Straight on the east side of Baranof Island.   We pull anchor at 8:15 and run in dense fog until about 10:20 breaking out as it burns off about the last 5 miles of Peril Straight, before turning south into Chatham Straight. The forecast today is clear, 77, and light winds. Megayacht ‘Serene’ is nowhere to be ‘seen’ even as a blob on the radar.

During this time Lizzy disappears and after searching and calling everywhere we become convinced she has gone overboard in the fog as we had briefly opened the door once.  As a last resort, I ask Ginny to reopen every cabinet door in the boat and low and behold, out she comes from the master head’s under sink cabinet.  She had a good time exploring the bowls of the boat. :<)  WHEW!!!!!!

The highlight of the day, other than finding Lizzy still on board, were the three large whales we watched for almost on hour near shore just north of Pt. Lull, about 1.5 hours north of our destination.  Two were together, right next to each other within 75 yards of us.

We cut the motor and drift silently as we were glued to them. One seemed to be almost sleeping right on the surface.    All of a sudden it bolted from the other with a huge forceful roll and for the next 20 minutes they first partially broached and them continuously rolled and slapped the water with their huge fins.  The water was almost mirror calm so watching all this was easy and fun.  We think we got some good pictures of all this.

Takatz Bay is absolutely spectacular as was yesterday’s stop in Appleton Cove.  It is a large protected cove about 3 miles long with high, high cliffs and glaciers towering over it plus a pretty waterfall. We anchored, dropped the crab trap and enjoyed the rest of the beautiful, warm, cloudless day.  After our third day in a row crab dinner, we both kayaked around the awesome bay for an hour. Dave thought he spotted a bear on shore. A sailboat came in and anchored so we were not alone.
Tomorrow we hope to leave early for our 40 mile run to Cannery Cove in Pybus Bay on Admiralty Island.  We are told that a luxury fishing resort is located there which welcomes ‘transients’ like us in their dining room.  We will find out! Unfortunately, intermittent showers and overcast skies are predicted for the next several days, although seas are predicted to remain calm. 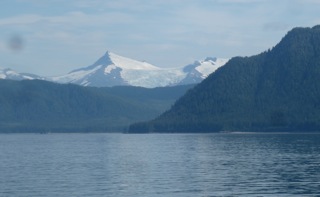 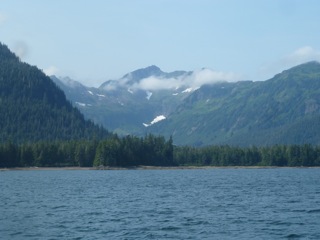 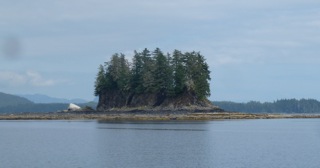 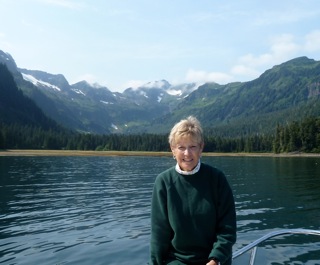 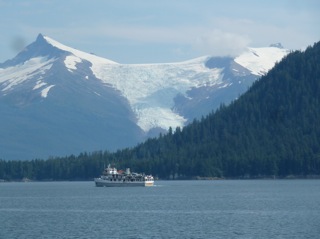 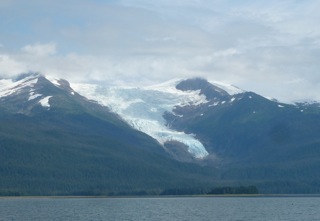 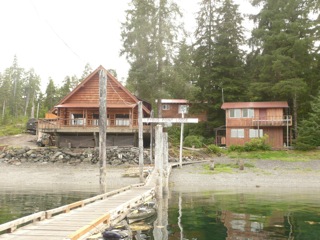 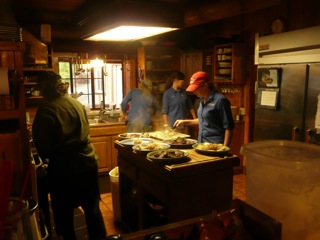 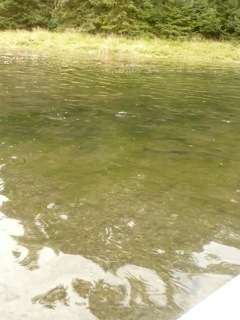 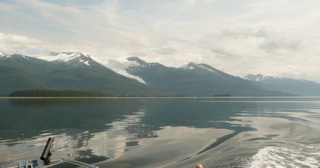 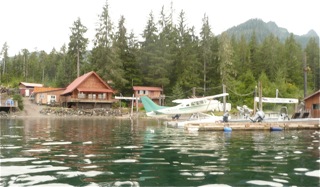