Goodbye to Family; Leaving the Gulf Islands for Desolation Sound 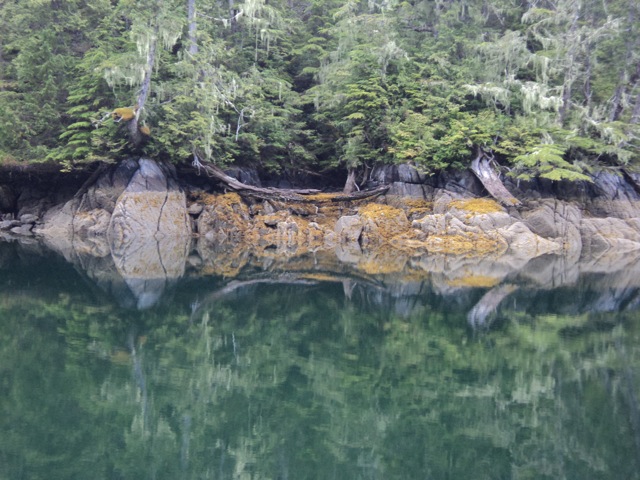 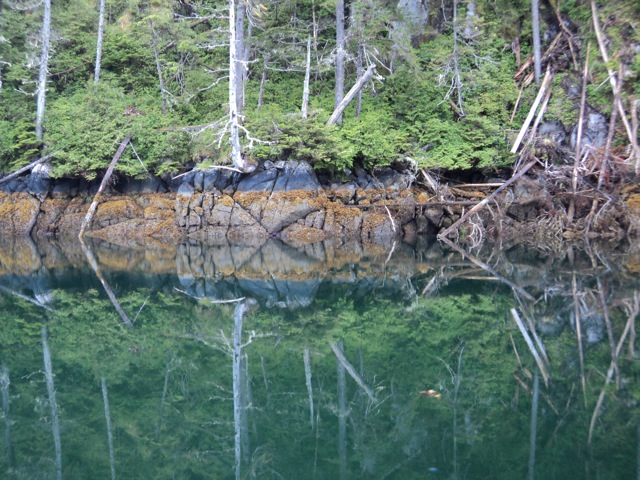 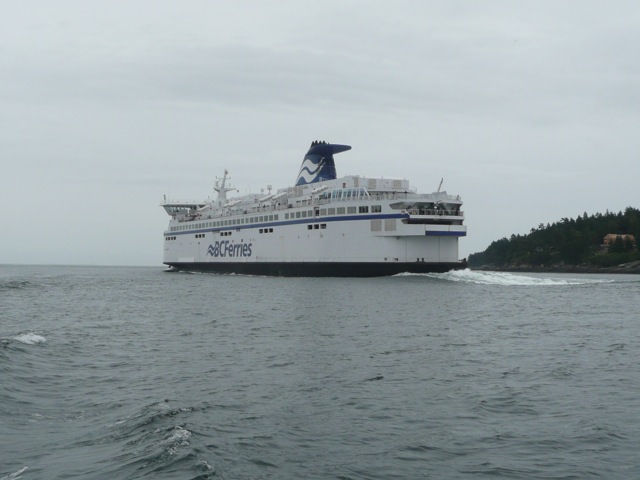 Sunday, June 23.  After dodging the BC ferries in the middle of Active Pass we are on the hook at Montague Harbor.
A pleasant but drizzly afternoon is spent at this huge bay, one of BC’s largest marine park.Cam is feeling better but spends most of t the day resting.  Ginny and Kristin take the 3 grandchildren ashore to ‘gunk hole’ and I do a dinghy cruise to the store on a beer and fishing gear quest. 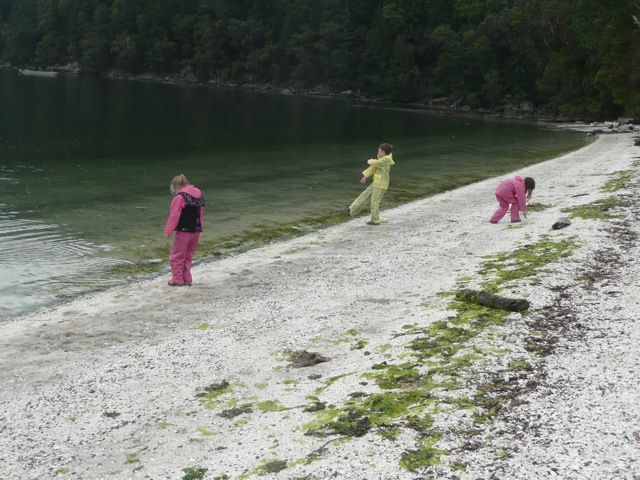 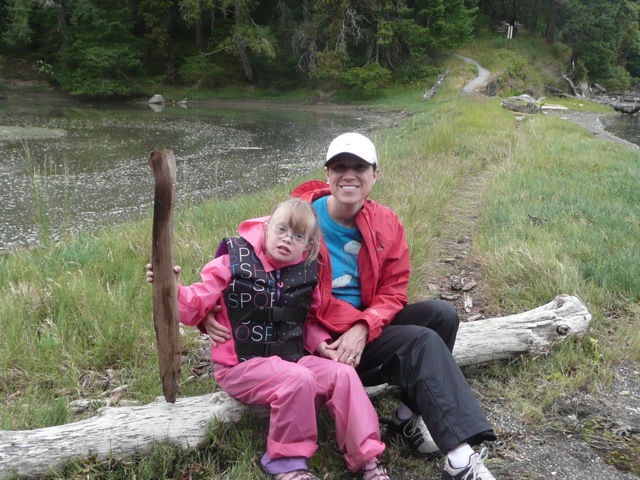 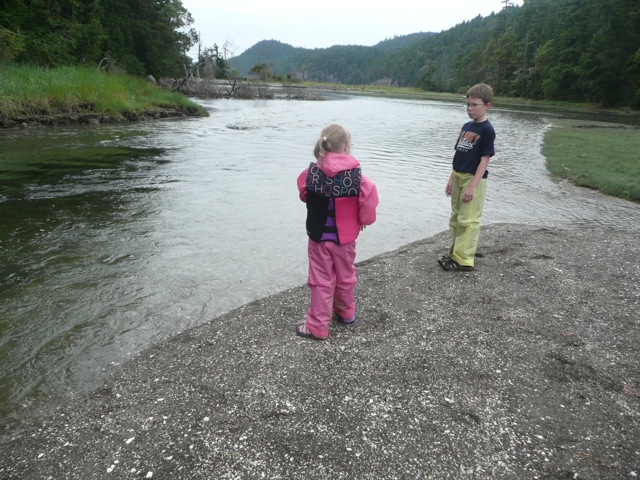 Ginny served a delicious pot roast and noodle dinner and Cam eats for the first time in 24 hours feeling much better and ‘starving’.  One of John Wayne’s classic Saturday ‘Nickel’ Matinee western movies is ‘enjoyed by all’ after dinner. At 52 minutes they are a perfect length for the young ones before bed time reading. 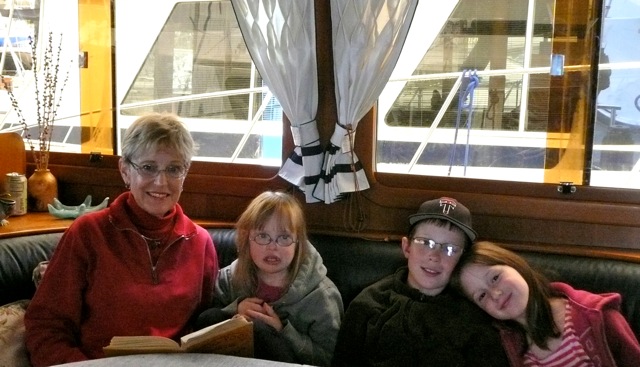 Monday, June 24.  It rains hard all night so the flying bridge camp out crew are a bit damp in the am. It is also chilly so everybody sleeps inside tonight. 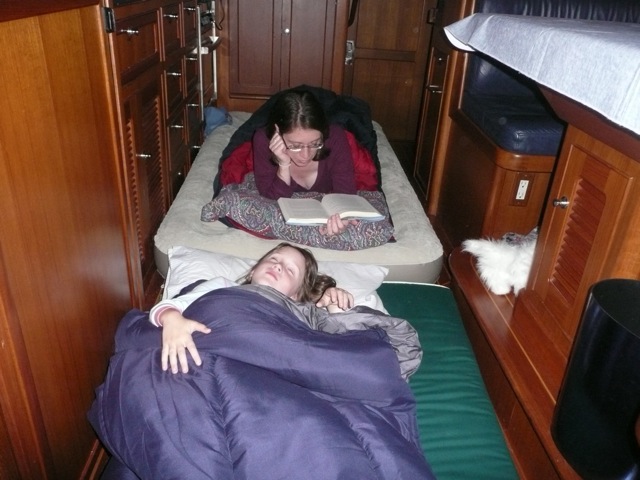 A big pancake breakfast fills and warms them.  We depart for Otter Bay but about half way there Cam learns that Caden has a playoff baseball game scheduled a day earlier than hoped for.  Accordingly we alter our course for Port Sydney Marina, where the family will depart via the ferry back to Anacortes at noon tomorrow, a day earlier than anticipated.
We arrive early afternoon and the young Morthlands work off their ‘cabin fever’ exploring this charming Vancouver Island town about 20 miles north of Victoria.  Dad suspects a possible battery issue and stays on board to deal with that. 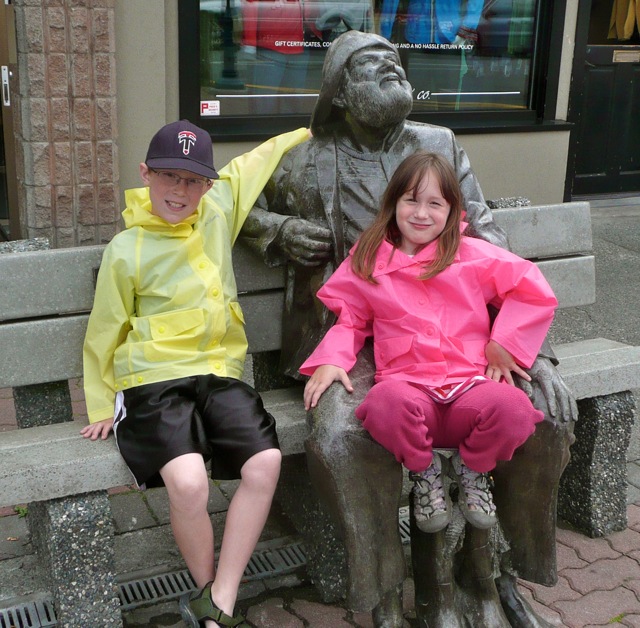 Tuesday, June 25.
The day is spent bidding good bye to the young Morthland clan, having a marine electrician test the entire battery system-nothing diagnosed- so apparently only a perceived issue on my part- so now I have ‘peace of mind’ and a much emptier pocket! Cest la vie. 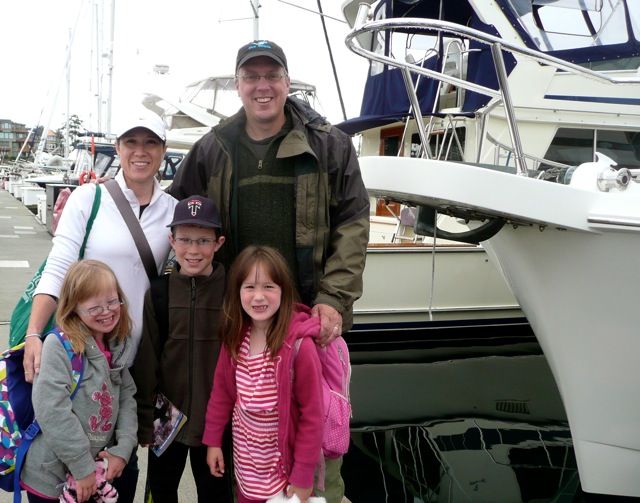 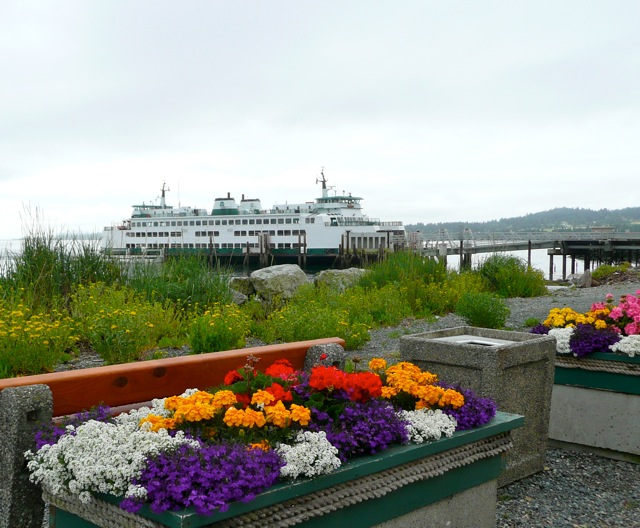 Spot shopping , boat cleaning, laundry, etc. and updating and uploading this blog consume the rest of the day. 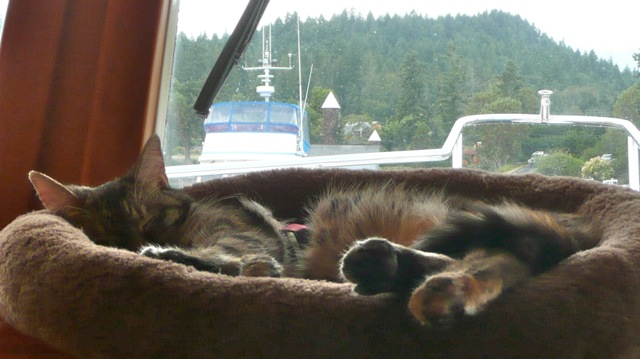 Day 10, Wednesday, June 26.  After a well deserved and good night’s sleep and a leisurely morning Ginny C, with Dave, Ginny, and Lizzy aboard, departs Sydney about noon and heads north.  The weather is clearing but is still quite squally. We have a great run up Sansum Narrows showing 9.7 nm speed over the bottom at one point and a steady 8 plus most of the way.  Our overnight tonight is a 4 hour , 27.8 nm run to Telegraph Harbor Marina on Thetis Island, one of our favorite places in the Gulf Island group.


Day 11. Thursday, June 27: The challenge of Dodds Narrows and on into Nanimo,BC

Dodds Narrows is 13 nm north of Telegraph.  It runs 8-10 knots current making transition at slack a necessity.  Today, our nav. aids tell us it will be slack at 7:34 am and again at 1:39 pm. being 13 miles away we have about a 2 hour run to get there in time to traverse it at slack tide.  Not wanting to depart at 5:30 am to make the 7:30 slack, we decide to sleep in and depart about 11am to give us plenty of time to get through this passage at the 1:39 slack water.  Once thru we will have only about a 6 nm run into Nanimo.

Thursday, June 27.  We have left the Gulf Islands and docked in Nanaimo after a 2 3/4 hour,19 mile run via Dodds Narrows. We reached these turbulent narrow 1 hour ahead of  its predicted slack at 1:39 pm.  My Nav aids said it was running over 4 knots against us so we killed about 15 minutes until we saw 3.5 knots and went through 50 minutes before slack being tossed a bit but no real issues.  it is narrow so boats were lining up in both directions.  Traffic was my biggest concern. 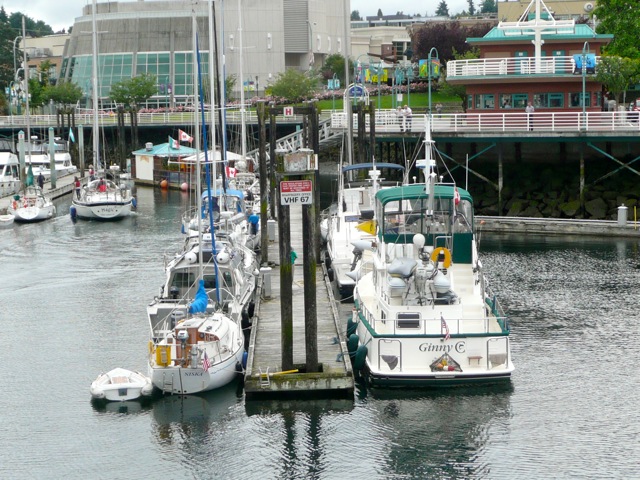 10 minutes after we docked our former Selene 5022, Ina Marie ( now ‘No Sheets’) called for dock space.  We watched her come in and dropped by for a short visit with Mike and Lori Young who purchased the boat from us in 2010. 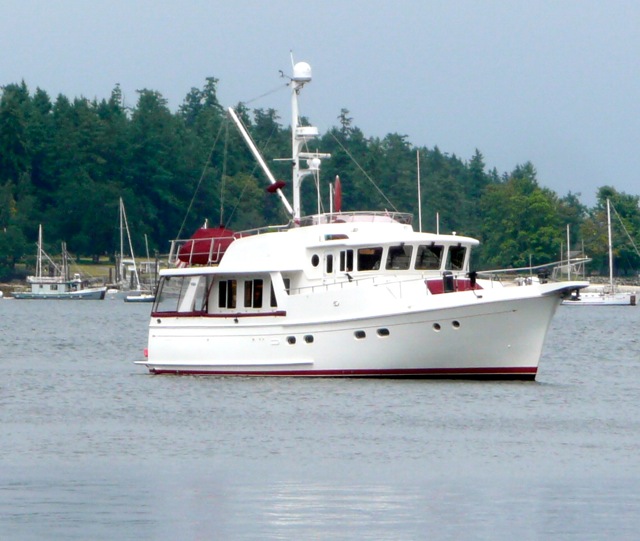 We will have dinner with Tucson friends, Al and Joy Grant.  We will spend the night here before leaving for a much longer day crossing the Georgia Straights on Friday, on our first leg toward reaching Desolation Sound where we will slow down again to spend several days enjoying this beautiful part of the inside passage/ Today’s small craft advisory in the GS is supposed to dissipate overnight.  If it does we will go but if not we will enjoy another day here waiting for predicted light winds on Saturday and will cross then.

To see our present location click on this typing.    After the map loads zoom in for detail. 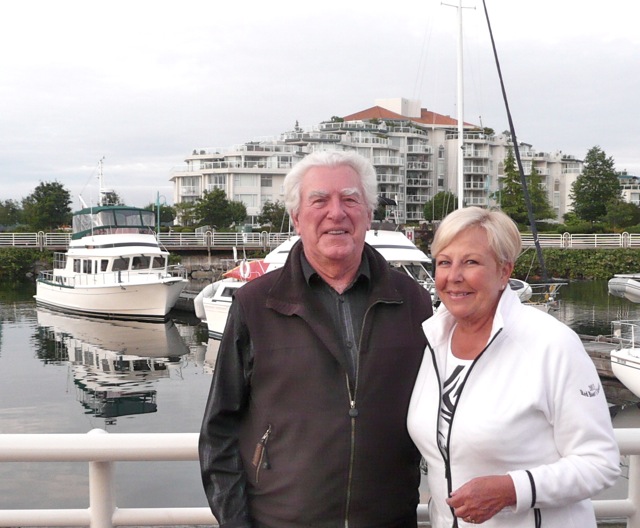 Friday, June 28.  After a great evening  and yummy dinner as guests of Tucson friends, Al and Joy Grant, it was off to bed and up at 6am for our 4 hour, 32nm crossing of the Georgia Straights and on into Madeira Landing in Pender Harbor. Seas were calm as SE Winds died overnight and gradually shifted to light NW, which should bring good weather--Finally--!!!   We did some basic shopping and are relaxing this afternoon before heading to Desolation Sound in the Morning. 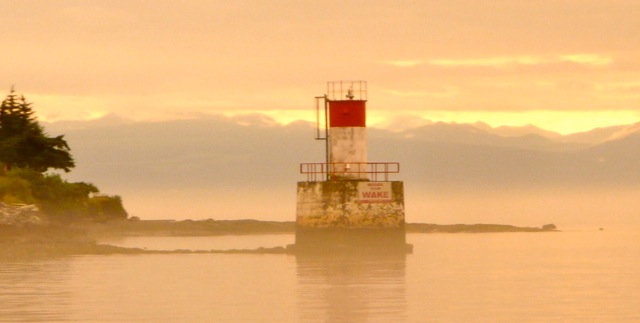 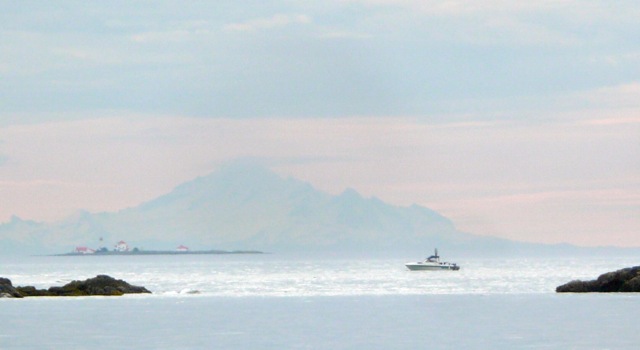 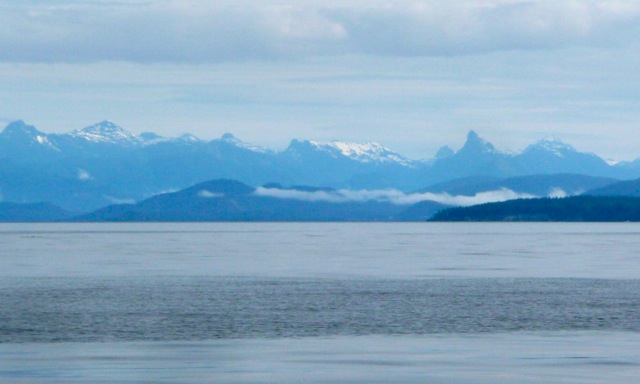 Ginny and I have been happily married for 50 years , have 2 sons and 6 grandchildren. We have been avid boaters since the mid 1970's. We have sailed in various parts of the world making 'bareboat' charter trips in the Washington and Canadian San Juans and Gulf Islands, Maine,the British Virgins, South Pacific's Moorea and Tuamoto's and New Zealand. We owned and raced a J-24, Laser, and cruised a Newport 30 before buying a long range trawler in 2003 and cruising the waters of the Pacific Northwest and the 'Inside Passage' of British Columbia to SE Alaska for the last 10 years. After first owning a 2000 Selene 47, and 2002 Selene 50 (both named 'Ina Marie', we now, in the 'bell lap' of our boating days, own, operate and thoroughly enjoy 'Ginny C' , our 2007 Selene 42.
Posted by The Ginny C Team at 6/28/2013 06:16:00 PM